In a long history of well over 5,000 years, the Chinese people have developed a unique, extensive, and profound culture. This fine traditional culture runs in the blood of the Chinese people and has become a part of the genes of the Chinese nation. Why do I say this traditional culture gives us an unfailing support? Because we Chinese people today still preserve, respect, and apply it. Confucius is a figure of over 2,500 years ago, but we today still read, study, and live by his words. I’m very happy to see that today's forum is attended by friends from all over the world. This is what Confucius said, "What a joy it is to have friends coming from afar!" China will not allow itself to be bullied by hegemonism, nor will it bully countries that are small or weak. This is what Confucius meant when he said,“Do not to others what you would not have others do to you.”

Chinese culture is exceptionally resilient and appealing. In China's history, herdsmen groups in the north conquered the inland several times, but they all, without exception, then succumbed to Chinese culture and soon became a part of the big family of the Chinese nation, and in this process further developed Chinese culture. This is why we say there is no such logic in traditional Chinese culture that a powerful country is destined for hegemony; China will never become a country seeking hegemony.

China's fine traditional culture espouses many important principles and concepts, such as pursuing common good for all; regarding the people as the foundation of the state; governing by virtue; discarding the outdated in favor of the new; selecting officials on the basis of merit; promoting harmony between humanity and nature; ceaselessly pursuing self-improvement; embracing the world with virtue; acting in good faith and being friendly to others; and fostering neighborliness. These maxims, which have taken shape over centuries of work and life, reflect the Chinese people's way of viewing the universe, the world, society, and morality and are an invaluable source of intellectual wealth and support for the Chinese nation.

More than 80 years ago when the CPC was still weak, Mao Zedong said, "From Confucius to Sun Yat-sen, we should take stock of our history and carry on this valuable legacy." General Secretary Xi Jinping also stressed,“We must not discard the fine cultural traditions of the Chinese nation; on the contrary, we must carry them on because they are the base and the soul of the Chinese nation, and without them, we will lose our roots.”Several days ago, General Secretary Xi Jinping paid an inspection visit to the Yinxu archaeological site in Anyang, Henan Province. The oracle-bone inscriptions excavated there shows us the characters used by Chinese 3,000 years ago. From then on, China's cultural traditions have continued unbroken to this day, which is something not seen in any other country in the world. In its century-long history, the CPC has always worked to keep China's fine traditional culture alive and strong.

I will give a few examples here. The goal of we Chinese Communists is to realize Communism, which is highly consistent with a Datong society, or a society of universal harmony, which was cherished by ancient Chinese philosophers. Both they and we wish to build an ideal society with no oppression, exploitation, or deception. The CPC's fundamental purpose is to serve the people wholeheartedly, which is a manifestation of the conception "the people create history”of Marxist historical materialism as well as a continuation of the ideas espoused in China's cultural traditions which regard the people as the foundation of the state and rank the people as the highest. The Party's line of thinking is to seek truth from facts, which are words dating from the Han dynasty (206 BC-220 AD) and draw on the best of China's traditional culture.

In the noble minds of Chinese Communists, there are many elements from the cultural gems of the Chinese nation passed on over thousands of years, which are in essence an endogenous continuation of fine traditional Chinese culture. For instance, where does the spirit of ceaselessly pursuing self-improvement originate? It was noted 3,000 years ago in the Book of Changes, which reads "Just as heaven maintains vigor through movement, greatness demands that one unceasingly pursue self-improvement." The spirit of fearing no sacrifice was recorded 2,300 years ago in Lü's Commentaries of History, which reads“Each and every one of us in the army would face death without fear." The goal of the CPC's foreign policy is to safeguard world peace and promote common development, and General Secretary Xi Jinping has proposed the idea of building a human community with a shared future, to build "an open, inclusive, clean, and beautiful world that enjoys lasting peace, universal security, and common prosperity.”The word "peace" is a very important concept in China's cultural traditions. 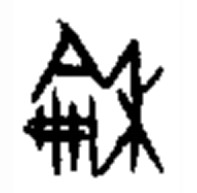 This oracle Chinese character "龢" means peace. It is composed of two parts: on the left, 龠(yue) is a kind of bamboo musical instrument; on the right, 禾(he) means crops or grains. So combining these two parts together, peace comes with music and food.

We hope, by following the principle of shared growth through discussion and collaboration, to safeguard world peace and build a human community with a shared future. This idea of our Chinese Communists represents a continuation and enhancement of China's traditional culture.

Marxism is the theoretical bedrock for Chinese Communists. When upholding and developing Marxism, the CPC has integrated the basic tenets of Marxism with China's specific realities and fine traditional culture. Chinese Communists firmly believe that only by integrating the essence of Marxism with the best of fine traditional Chinese culture and with the common values that our people intuitively apply in their everyday lives can we keep endowing Marxist theory with distinctive Chinese features and consolidating the historical basis and public support for adapting Marxism to the Chinese context and the needs of our times and can we ensure that Marxism puts down deep roots in China.

For more than one hundred years, Chinese Communists have set off contemporary energy of Chinese culture, elevated contemporary relevance of values in Chinese philosophy, and increased the global significance of Chinese wisdom. So we can say with great pride that Chinese Communists have been truly upholding fundamental principles while breaking new ground for fine traditional Chinese culture.

3. China is committed to learning from each other, drawing on each other's strengths, and achieving common progress with all other cultures in the world.

We are committed to carrying on China's fine traditional culture, but we never say that China's traditional culture is superior. Over 3,000 years ago, our ancient philosophers had enlightened us, "The more you learn, the less you feel you know" and "One loses by pride and gains by modesty.”It is a tradition in Chinese culture to accept all good advice and progress with the times. Stubbornly adhering to one's tradition and rejecting any foreign culture would only result in one's own culture suffering "anemia,”withering, or even dying out. Every nation and culture in the world has its own strength that China can learn from. In recent years, many Chinese young people like wearing Hanfu. Let's see several pictures.

These traditional Chinese clothes are an important part of China's cultural traditions, but we will not reject lounge suit just because we like Hanfu, and most of us in attendance today are wearing lounge suits. Different cultures and traditions do not have to be in conflict; they can rather coexist and develop together. Just as sunlight is composed of seven colors, so too our world is full of color and splendor. Every country or nation has its own historical and cultural traditions and its own strengths, and what we should do is to respect each other, learn from each other, draw on each other's strengths, and achieve common progress.

Excerpt from Wang Junwei's Speech at "Hong Ting Forum: Understanding the 20th National Congress of the Communist Party of China".

The traditional Chinese culture embodies a wealth of philosophical ideas, humanistic concepts, edifying values, and moral principles.China's fine traditional culture is the cultural origin and lifeline of the Chinese nation. It has not only nourished the enduring growth of the Chinese nation, but also provided important inspiration for resolving challenges confronting humanity today.